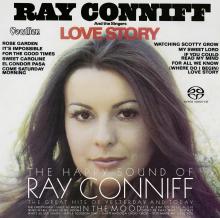 Released in December 2018, this was the fourth Ray Conniff SACD released by Dutton Vocalion. The hybrid SACD features the CD layer containing the stereo mixes and the SACD layer featuring both the stereo and quadraphonic mixes.

Remastered from the original analogue tapes by Michael J. Dutton

The packaging includes the liner notes from the original Lps.

The Happy Sound of Ray Conniff

Below are quadraphonic samples from each album. Part of the recording is just the stereo front channels and the other part rear channels, with some overlap: