The Essence of Ray Conniff 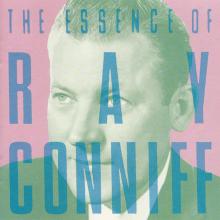 This compilation was released as part of "The Essence Of" series in 1993 (Columbia/Legacy CK 53574).

In the field of popular music, successful instrumentalists are often considered a rarity. But as if the odds against him were not enough, Ray Conniff marked an entire generation with his music, playing, of all things, the trombone, an instrument seldom associated with solo careers. That he succeeded so well is a testimony to his deft understanding of what people wanted to listen to when he emerged on the music scene in 1956.
Born in Attleboro, Massachusetts, in November, 1916, Conniff received his early musical training from his father, a trombone player. After finishing school, he moved to Boston and began working with various local "society" bands, learning his trade as an arranger with these and other more swinging outfits. Following stints with Dan Murphy, in 1934, and Hank Biagini, in 1936, Conniff joined the great Bunny Berigan in 1937, and subsequently Bob Crosby with whom he stayed through 1940.
In the heyday of the big bands, there was no dearth of trombone players, but because he could also write snappy arrangements, Conniff managed to make a name for himself and stand out from the crowd. In 1941, he formed his first group, but when success eluded him he quickly returned to the fold with better known band leaders, notably Vaughan Monroe, and Artie Shaw, whom he followed in the Navy. While with Shaw, he arranged "Prelude In C-Sharp" and " 'S Wonderful."
After the war, Conniff became an active member of the Harry James band, notably contributing many riff arrangements for James' easy-going type of music. But the big band era was coming to an end, and by 1948, Conniff found himself increasingly relying on his talents as an arranger rather than as a player. In August, 1954, he went to work as a staff trombonist for NBC, and the following year signed with Columbia Records as arranger-conductor for some of the label's pop vocalists, like Guy Mitchell, Rosemary Clooney, Frankie Laine, Johnnie Ray, and Marty Robbins, among others.
When Mitch Miller, then head of A&R, asked him to score "Band Of Gold" for a new album by Don Cherry, Conniff wrote an introduction to the tune using a vocal chorus. The novelty caught on, and, as a result, the song became a million-seller.
In June, 1956, Conniff entered the studio to record his first album as a leader, and applying to himself the formula that had worked so well for Don Cherry, recorded " 'S Wonderful." His tingling arrangements and exuberant rhythms turned the tune into a huge hit, and introduced what became known as the "Ray Conniff sound," in which the singers often are heard either playing along with the other instruments or contrasting them with lines of their own in what amounts to a musical dialogue.
Released in 1956, 'S Wonderful stayed on the charts for nine months, and paved the way for a string of other albums such as 'S Marvelous (released in November, 1957) and 'S Awful Nice (released in May, 1958), all which relied on the same inventive formula.
In 1959, Conniff decided to move out of the studio and into the live concert arena, bringing along with him the sophisticated sound mixing that had ensured his success. His first appearance, at the Santa Monica auditorium promptly sold out, a feat duplicated shortly after at the Hollywood Bowl where he and his group performed in front of 19,000 people.
Undaunted by the onslaught of rock 'n' roll and changing tastes, Conniff went on recording albums throughout the 1960s and '70s, appearing in concerts all over the world, and making new converts to his infectious brand of music. One reason for his perennial appeal may be seen in the fact that he wisely chose to upgrade his repertoire, switching from the great Tin Pan Alley standards to contemporary hits by today's best pop writers.
Indicative of this, this compilation contains some of the tunes that kept Conniff's name in the limelight during these years. Beginning with " 'S Wonderful," it includes some standards, such as "I'll See You In My Dreams" and "Memories Are Made Of This," as well as new compositions, like "Somewhere My Love (Lara's Theme)" (a #9 hit), "What The World Needs Now," "Up, Up And Away," "(Where Do I Begin) Love Story," and "I'd Like To Teach The World To Sing (In Perfect Harmony)."
Today, 36 years and 88 albums after he made his debut as a leader, Conniff continues to inspire the world with his unique brand of music. Only last year, he released a new album for the label, 'S Always Conniff, proving that he had lost none of his appeal. In a field where instrumentalists are not known to last long, this is saying quite a lot about the man with the happy beat and the infectious orchestral-cum-vocal arrangements.
— Didier C. Deutsch