Home » Discography » Original Albums » Memories Are Made Of This

Memories Are Made Of This 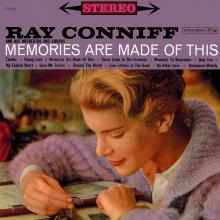 This CD can be purchased from Amazon.

Ray Conniff has developed a completely new and refreshing sound in the field of popular music. His sparkling rhythmic treatments, with a vocal chorus used as a section of the orchestra singing syllables rather than words, were one of the freshest new ideas in popular music since the early Forties.
There are several distinct qualities that are always found in any Conniff album. First of all, the vivid sound. To achieve this sound, Ray has worked many long hours with the Columbia sound engineers. The choice of songs is always tasteful and musically the Conniff orchestra is always superb, because of the painstaking efforts of its perfectionist conductor.
Ray has always had a special knack for featuring great musicians on his albums. Billy Butterfield plays a beautiful trumpet solo on Love Letters in the Sand. Bernie Leighton is the featured pianist throughout the album, and Doc Severinson pays that exciting trumpet on Three Coins in the Fountain.
The twelve songs selected for Ray's new album are among the biggest hits of the past ten years, and each is certain to recall many pleasant memories to all listeners.
The title song, Memories Are Made of This, gets things started with a delightfully happy sound and infectious beat. A new Conniff rhythmic sound is heard for the first time on Tammy, as flamenco rhythms of guitars add a new richness to the orchestra's Latin beat. This same treatment is used to exciting advantage again on Around the World, No Other Love, Three Coins in the Fountain, and My Foolish Heart.