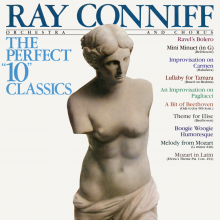 The European version of this album has the same cover but substitutes "Ravel's Bolero" with "Excerpts From Beethoven's Moonlight Sonata."

Ray Conniff was born in Attleboro, Massachusetts and wrote his first arrangement when he played trombone in his high school dance band. Later, he contributed his dual talents as arranger and trombonist to such dance band greats as Bunny Berrigan, Bob Crosby and Artie Shaw. Then Ray supplied arrangements for two years to the Armed Forces Radio Service (until 1946). After the war, Ray served as an arranger for Harry James.
In the late '40's Ray made a thorough study of just what kind of arrangements people like to hear. His ear for arranging music was successfully matched by an intuitive ear for the musical tastes of the record-buying public. He developed a formula for arranging, while conducting for early CBS artists, that sold millions of records and earned prestigious awards for such single hits as Don Cherry's "Band of Gold," Johnny Ray's "Just Walkin' in the Rain," Guy Mitchell's "Singin' the Blues," Johnny Mathis' "Chances Are," and "It's Not for Me to Say."
In the '60's, "The Ray Conniff Sound" was acclaimed on tours with his "Concert in Stereo" throughout the world. In 1967, Ray won a Grammy Award for his album "Somewhere My Love." Since then, albums garnering nine Gold Record Awards were: "'S Marvelous," "Concert in Rhythm Vol. 1," "Memories Are Made of This," "So Much in Love," "Christmas with Conniff," "We Wish You a Merry Christmas," "Somewhere My Love," "Honey" and "It Must Be Him." To this date, Ray has recorded about 65 albums with total sales of over 35,000,000. One of his most coveted awards is the Crystal Globe Award, which he received because of sales of over 15,000,000 albums in countries outside of the United States.
The foregoing serves only too briefly, to introduce an artist whose devotion to good music of all kinds impels a constant and restless exploration of means to express homage to good music, both new and old. In The Perfect "10" Classics, Ray reinterprets for modern ears the masters he admires. In the process, he reappraises, tastefully and inventively, three symphonic works (Ravel's Bolero, Beethoven's Ninth Symphony and Mozart's Symphony No. 40); two operas (Bizet's Carmen and Leoncavallo's Pagliacci); three piano solos (Beethoven's Minuet in G and Für Elise) and Dvorák's Humoresque); and one song (Brahm's Lullaby). This last is, incidentally, dedicated to Ray's eight-year-old daughter, Tamara. In his process of rehearing ten cherished classics, Ray has incorporated some appropriate musical ideas of his own without violating the originals. Take, for instance, the irresistible jazz punctuations in "A Bit of Beethoven." Effectively conspicuous throughout is the characteristic Conniff use of mixed voices (four boys and four girls) to complement and color the instrumental fabric and add vibrant emphasis to the melodies.
As always, instruments and voices are invigorated by the traditional Conniff rhythm sound, which has caused audiences to tap their feet all over the world ever since those first dances back in the Attleboro High School Gymnasium. I'm sure you'll be doing the same when you listen to: The Perfect "10" Classics.