Love Theme From The Godfather 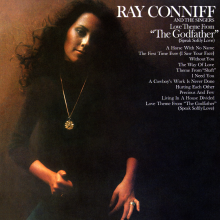 Although generally Ray Conniff records records with 25 singers singing simultaneously with the orchestra, this album was recorded with only six singers using the overdubbing technique. Occasionally Ray joined the boys and sang a seventh part. The rhythm tracks were recorded first, then the singers and finally the brass and strings.
The top row shows the singers entering the control room to listen to a play back. Reading from left to right: Jackie Ward, Sue Allen followed by Ron Hicklin, Sue and Ron again, Tom Bahler, John Bahler and Sally Stevens.
Second row left to right shows: Ray at the piano in the studio with the singers in the background, all six singers at work overdubbing chorus parts to rhythm tracks recorded the previous day, Ray working with the singers in the studio.
The third row shows Ray working with the girls, and a shot in the control room showing the boys, Ray and his wife, producer Snuff Garrett, and engineer Eric Prestidge.
The bottom row shows close ups in the following order from left to right: Sally, Jackie, Sally and Sue, Tom relaxing between takes, Ron and John listening to a playback and finally Ray and his wife in the control room.
The insert at lower right shows Ray listening to a playback with his toy poodle "Lucky."